Throne II is the final form of the Nuclear Throne.

It appears after you kill the last I.D.P.D. unit in the Campfire area. It spawns in the exact same spot where the last enemy was killed, so be careful as it can kill you instantly while spawning in.

The game loops back to the Desert area after defeating this boss.

Throne II constantly floats around the area, dealing 10 damage on contact. It has two attack phases.

Throne II fires bursts of large green orbs. There are two types of this attack:

Both types of large orbs have a high chance to drop mini ammo/health pickups.

The Throne will stop moving for a moment and shoot out fast moving lines of smaller green orbs in a star pattern around its center. Each small orb deals 5 damage. 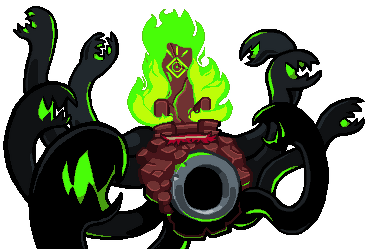