The Nuclear Throne is the boss of The Palace and currently the final boss of the game.

As you approach the end of the throne room (7-3) walking on a long red carpet, you reach a huge throne with a skeleton sitting on it. You cannot walk up the stairs to sit on it yourself. Attempting to shoot the throne will destroy the skeleton. The room starts to shake and the music changes as the Throne boss enters its first attack phase. Beating the Throne will end your run unless you loop the game.

The large cannon in the center of the Throne fires out a beam of laser. After the first beam phase the throne transforms, grows legs and begins to move in your direction a little at a time. It deals 10 melee damage. It will cycle randomly through moving, and Beam, Orb, or Tri-shot phases over time.

Walking on the red carpet during the fight can trigger the boss to fire its beam.

Walking away from the boss triggers it to move towards you. As it comes in contact with the Throne Statue props, it will break them. Each statue spawns a Guardian that will try to kill your character.

The Throne fires 2 large green orbs which, in turn, explode into 7 lines of 4 smaller orbs each. This is the main attack of the Throne, and is fired toward the player. The large orbs have a high chance to drop mini ammo/health pickups. Each smaller orb deals 5 damage on contact. The large orbs causes 12 damage on contact. Large orbs instantly spawn the small orbs upon hit. Large orbs will break the Throne Statues which spawn Guardians.

The Throne fires a triple bullet shot from 2 mounted turrets. Each row has 8 green bullets. In total, it fires 48 large bullets in the general direction of the player and will often repeat this attack, each time changing it's direction. Each green bullet deals 2 damage on contact.

Upon death the Throne explodes into multiple small explosions and then one large explosion. The massive blast consists mostly of big green explosions which deal 12-24 damage each.

After defeating the throne you will see the game's ending.

Destroying all four Large Generator props during the boss fight removes half of the Throne's remaining HP and guarantees that a Loop Portal opens after the Throne is defeated. By entering that portal you will skip the ending and loop the game. You will return to the place where you pick your character - The Campfire (area 0-1). Each Large Generator has 230HP.

Each loop adds more projectiles to the Throne's attacks. Large orbs will split into one more row of smaller orbs after each loop. The tri-shot bullet attack gains one additional bullets for each row per loop which also makes it last longer.

Each Throne Statue will spawn an additional Guardian per loop. 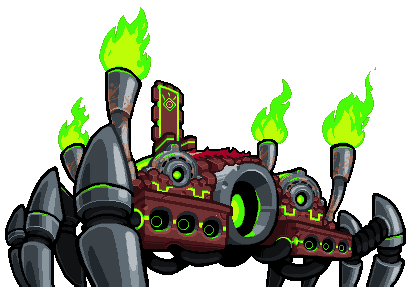 Retrieved from "https://nuclear-throne.fandom.com/wiki/The_Nuclear_Throne?oldid=44538"
Community content is available under CC-BY-SA unless otherwise noted.