Unlocked by defeating the Technomancer boss as Steroids. 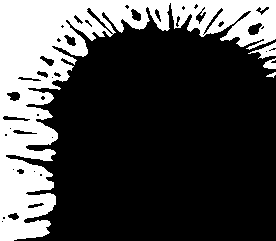 Steroids is the only character that has the ability to shoot both of his weapons at the same time. Steroids shoots inaccurately but starts with more ammo than other characters and all weapons used by him are fully automatic.

Steroids has less accuracy. With weapons that have spread, the spread will be wider. Steroids' base inaccuracy rating is 1.8 (up 0.8 from 1 for all other characters), resulting in 80% more inaccuracy when firing.
It's also worth noting that because this effect is a multiplier and not a flat increase, guns with perfect accuracy are not affected. These weapons include the crossbow, heavy crossbow, laser cannon, golden laser pistol, golden grenade launcher, and most melee weapons (that is, excluding shovels and screwdrivers).

In addition, all weapons used by Steroids are fully automatic, including melee weapons. Holding down the fire button will fire/swing the weapons constantly as they reload automatically.

Steroids dual wields his weapons, allowing him to shoot and reload two weapons at the same time. The button used to activate special abilities is used to fire his secondary weapon.

Firing with your primary weapon may add a small amount of ammo for your secondary weapon and vice versa. The chance and amount of ammo you receive depend on what type of weapons you have. Mainly how much ammo they use per shot and how much ammo they receive from Mini Ammo Chests. This is more likely to occur when both weapons are being fired at once. This mutation doesn't work if you have at least one melee weapon that doesn't use ammo.

The chance per shot to receive ammo for the other weapon (the one you are not firing at the moment) equals:

If you are firing both weapons at the same time, the multiplier changes from 1/2 to 2/3 and the chance to get ammo rises:

Following the example, it would be:

Steroids excels at taking on large groups of enemies at once and relying on sheer firepower to finish engagements before enemies can react. His Throne Butt is a crucial upgrade, as it gives you the ammo conservation to make this a viable tactic. A great tactic, especially for the Sewers levels, is to take a melee weapon in the off hand, allowing you to quickly reflect projectiles and deal with melee enemies, giving Steroids a great amount of survivability, as well as offsetting his increased ammo consumption due to the accuracy loss. Steroids' lower accuracy affects all spread-related weapons, from Super Crossbows and Shovels to Triple Machineguns and Laser Miniguns.

Steroids is unlocked by reaching the Labs area.