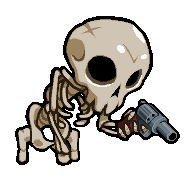 Skeleton is a secret character playable only if you lose all of your HP as Melting while inside a Necromancer's resurrection circle. It's a very difficult character to play, as it gambles its health in exchange for not using ammo.

Upon losing a fatal amount of HP within a Necromancer's summoning circle as Melting, you will be instantly turned into Skeleton, and the following things will occur: All previously acquired experience (radiation) will be removed, your character's level will be reset back to 1, all previously picked mutations will be lost, and your HP will be set to 1/4. However, the weapons, as well as the total ammo that you had prior to turning into Skeleton will be kept, and the game's difficulty and your kill count will stay the same.

Aside from spawning with 1 out of 4 HP, Skeleton is also less accurate (spread multiplier 1.5x) and has noticeably lower movement speed.

Skeleton will fire a shot that won't use ammo. There's a random chance that Skeleton takes 1 damage. The chance depends on what type of weapon you use. Mainly how much ammo it uses per shot and how much ammo it receives from Mini Ammo Chests. This ability doesn't work if you hold a melee weapon that doesn't use ammo.

The chance that Skeleton takes 1 damage when firing a weapon with Blood Gamble equals:

Which means Skeleton will be damaged more often with weapons that use high amount of ammo per shot. With some weapons (Super Flak Cannon, Super Plasma Cannon), Skeleton is guaranteed to take damage.

Blood Gamble ignores automatic weapons' continuous firing. It's always a single shot or a single burst, regardless of the weapon.

In the late game, Skeleton's active ability synergies very well with mutations such as Trigger Fingers, Bloodlust, Throne Butt, and Damnation. This is especially helpful with weapons with high ammo costs (Super Plasma Cannon, Lightning Cannon, Super Flak Cannon, etc.). The high reload speed combined with the Bloodlust procs makes its active ability very effective against crowds. Turning back into Melting with Redemption is also a good tactic which gives it an extra mutation and more health.