Unlocked by defeating the Captain boss as Rogue. 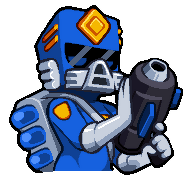 Rogue has been designed as a difficult to play, rush character. She is ambushed by the I.D.P.D. right from the start. Her passive ability causes an explosion to appear at her position whenever she gets hurt. Rogue's active ability allows her to call in a Portal Strike, for which special ammo has to be found in the levels, replacing Radiation Canisters.

Starts off with the Rogue Rifle, a bullet weapon unique to Rogue which acts as a faster-firing Assault Rifle that only fires dual-bullet bursts.

Whenever Rogue is hurt, a blue explosion activates on her position, dealing 8-16 damage to any enemy that is too close. It also destroys walls, enemy projectiles and can damage props. Be careful when you get hurt near explosive objects as it can cause them to explode and kill you in the process.

Rogue is automatically "chased" by the I.D.P.D.. From the start of each run I.D.P.D. troops will spawn from two pairs of portals on every level except the Crown Vault and 7-3. The first pair of I.D.P.D. portals appears after you kill a certain amount of enemies on a level. The randomized amount is between 20% to 80% and can be different on each area. The second pair of I.D.P.D. portals opens at the same time as the level ending portal.

I.D.P.D. portals only spawn Grunts by default. After enough I.D.P.D. portals open during a run Inspectors and eventually Shielders will have a chance of spawning. So the more portals appear throughout the run, the tougher units can spawn.

Rogue starts off with 1 ammo in her special meter. She can hold up to 3 uses, and gets 1 ammo from Portal Strike Ammo Canisters that replace Radiation Canisters. Each use of the special costs 1 ammo.

Clicking and holding the special ability button creates a straight pattern of blue arrows where the cursor is. When released, 5 blue explosions activate in a line starting at the end of the pattern and following the arrows direction. Targets can get hit by multiple explosions at once, which also depends on the enemies size. These explosions do 8-16 damage. They destroy walls, objects, and enemy projectiles. They can also damage Rogue.

Rogue's Portal Strike explosions are much bigger. They still deal 8-16 damage but enemies are more likely to get hit by multiple explosions.

As a character unlocked late in the game, Rogue is somewhat of a character for more experienced players. Her starter rifle is helpful in dealing with enemies and her portal strike is good for dealing damage from a safe place, or to create cover by blowing a hole in the wall, but constant waves of I.D.P.D. and a lack of Radiation Canisters is a severe handicap. Players must rely on their skill and always be on the lookout for I.D.P.D. as when they appear is randomized each level.

Rogue is unlocked by defeating The Nuclear Throne and sitting on it.