Unlocked by defeating The Nuclear Throne in under 10 minutes as Plant. 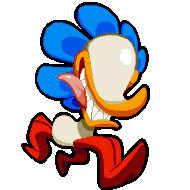 The combination of Plant's snare, movement speed, and ability to move the camera makes it a sniper character that's good at dodging projectiles and is able to outrun enemies or block itself from them.

Plant can shoot a seed that rapidly grows vines that significantly slow down enemy movement almost seeming like they are still. This doesn't prevent enemies from shooting. The vines are less effective on bigger enemies.

The snare must connect with a wall, a prop, or an enemy before you can use it again. Only one vine can be active at a time, for the vines disappear as soon as you shoot another seed.

If you hold down the button while using this ability, the camera focuses on the vines, allowing you to see further ahead. Vines also provide light in dark areas and stop fire from Fire Traps.

Plant's Throne Butt makes its vines kill anything under 33% health.

If you also have the Scarier Face mutation, Plant's ability will kill enemies basing on their reduced max health. For example, if an enemy's health was reduced from 100 to 80 by Scarier Face, the enemy will die on 26HP which is 33% of 80HP.

Plant's extra speed makes it good at keeping its distance from enemies. Holding down the button that activates its special causes the camera to focus on the vines giving the player extra vision of what's going on ahead. Those special features make Plant a pretty good sniper, and with Throne Butt it kills enemies and Bosses even faster. The vines can block narrow corridors, stopping enemies from getting too close to you, which is helpful in the sewers and labs as most enemies in these areas are fast melee enemies. Using vines on enemies capable of spawning more enemies (Big Green Rats, Giant Maggots, Maggot Nests) will trap them as they spawn, making killing these enemy types incredibly easy. With the Killer ultra mutation, this method will also spawn lots of saplings at once. However, the snare won't stop things such as Giant Maggots from burrowing or Ravens and Lil' Hunter from flying away.
Plant is also a capable melee character, as it can easily catch up to enemies and safely attack snared enemies that deal contact damage. Its Throne Butt also makes melee weapons one shot more easily.

With increased movement speed, Plant is good wearer of the Crown of Haste, being able to reach pickups faster before they fade away.

Plant is unlocked by reaching the Scrapyard area.