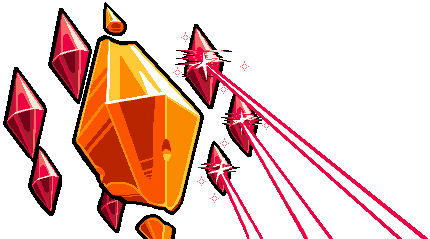 The Hyper Crystal is a boss encountered in the Crystal Caves after looping. It appears as a large Laser Crystal surrounded by five smaller Laser Crystal enemies that constantly circle around the boss. Each loop after the first will add two more Laser Crystals.

While the Hyper Crystal itself doesn't have a direct means of damage, its Laser Crystal orbitars will periodically fire bursts of 4 lasers at the player, illuminating the path of their lasers with a trail of red particles before firing. Their lasers deal 1 damage per animation frame, dealing varying levels of damage from 1 to 4hp or more per laser, depending of hit acurracy. What determines the precise damage amount is a secret the Protomutant presumably took to his grave.

Laser Crystals do 20 melee damage, which can kill your character if they stand too close to the boss. Hyper Crystal itself does 200 melee damage and can destroy walls while moving.

When you hide behind a wall, the Hyper Crystal will send out its Laser Crystals to explode near your character. As the Laser Crystals expand away from the boss they will stop rotating. Their explosions can destroy walls and can blow up your cover. Each explosion will also create a fixed pattern of 7 lasers around its center, increasing by 2 with each loop. The boss will continue to do this until it has clear sight of your character and its surrounding Laser Crystals are able to shoot in your direction. 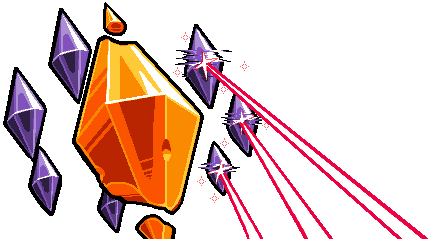 If you enter the Cursed Crystal Caves secret area during a loop, you will fight the Cursed Hyper Crystal. This variant will surround itself with Cursed Laser Crystals in place of Laser Crystals, which can randomly be replaced with a Lightning Crystal or cursed Cursed Spider.