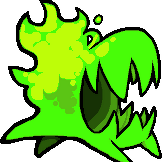 Unlocked by defeating the Hyper Crystal boss as Horror. 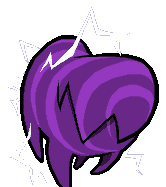 Horror takes the shape of an amorphous radioactive energy being that can turn radiation into a deadly beam, which can be used offensively and defensively. Horror also gets one extra mutation choice after leveling up.

Horror's passive gives it the option of an additional mutation choice every level up. Instead of the normal four per level, a fifth is added on the far right. Horror also has an additional ultra mutation to choose from, giving it three instead of the standard two.

Thanks to this passive ability taking the Crown of Destiny leaves you with a choice between two mutations.

Horror's special shoots a green beam of tightly packed particles, using your Rads (experience) as ammo. The experience usage does not dip into previous levels; that radiation was already used for mutations. Each particle does one damage, that means 30 damage per second.

The beam can also destroy enemy projectiles. Beam particles get cleared in a small area where an enemy projectile was destroyed, which means you lose the rads used to fire those beam particles. The beam gets wider the longer you shoot it, dealing more damage and covering more space as a result. It can't be deflected, but gets negated by Shielders.

Enemies killed with the beam will drop back all rads you used to deal damage, to refill your meter up to its original state. Horror doesn't attract rads for 3 seconds after using the beam, but walking over the rads will pick them up. Destroyed props or killed enemies that normally don't drop rads (like the I.D.P.D. or Small Green Rats) will drop radiation if damaged by the beam. Shooting a Proto Statue with the beam charges the statue with radiation. When the beam hits a wall the used radiation is lost.

Horror's radiation beam gets wider twice as fast. Using the beam for extended periods of time now heals Horror (1 HP for every 1.5 seconds).

The concept of Horror's passive is very helpful, as it gives a higher chance to have all your relevant mutations to build around any weapon. Its special can be a potential game-saver, being able to kill enemies after you run out of ammo. The beam can also destroy projectiles, giving Horror an easier time in areas where one would be under constant projectile fire (such as the Scrapyard and The Palace). Shooting a Proto Statue with the beam charges the statue with radiation. Horror begins to shine once it reaches the late game, as it is either at the level cap or has all the mutations it wants, allowing it to use its active with relative freedom, as long as it has enough radiation to spare. This means that along with its beam and weapon fire, Horror can output a lot of damage in a very short time. If you have the Throne Butt mutation, firing the beam against a wall for extended periods of time heals Horror if you're willing to sacrifice some radiation in the process, but this tactic only works when you have enough radiation to spend.