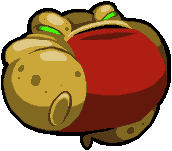 Frog is a secret character playable by starting the game with a Golden Frog Pistol.  He is based on the Ballguy enemies and shares some of their attributes, such as constant movement which makes them harder to control. On the upside, Frog's toxic immunity and gas spreading ability can help him better control his surroundings.

Unlike every other character in the game, Frog has to move constantly. Tapping any movement key will cause Frog to turn in that direction and walk straight, bouncing off any walls it collides with. The only way to stop his movement is to use Frog's special ability, which forces him to stand still while he charges up his attack.

As Frog is a Ballguy, he is immune to toxic gas clouds and explodes into 20 green projectiles when killed.

Frog will stop moving for as long as you hold the button, then release a bunch of toxic clouds based on how long you've held it for. A single toxic cloud deals 3 damage on contact with an enemy and after that disperses. Toxic clouds don't deal damage to destructible objects.

Frog's Ultra Mutations allow it to be surprisingly versatile. Both of the allowed selections give Frog the ability to play in a vastly different way. Choosing the Distance mutation favors a long-distance playing style, using rads to deal bonus damage as you chip away at enemies from afar. A bonus to this playstyle is that your inability to stop moving isn't as terrifying, due to a lower chance of you accidentally taking contact damage from running headfirst into an enemy.

Frog's Ultra B, Intimacy, obviously favors a close-range play style, relying on gas clouds and reckless abandon to blast through hordes of enemies. A bonus to this playstyle is, with Intimacy's second effect of constantly spewing gas with the Active instead of forcing you to stop and charge it, using your Active offensively becomes much more viable. Keep in mind, however, that using a melee weapon will destroy your own toxic gas, so it's recommended you use close-range weapons, such as Shells, instead, as to deal the most damage possible with your gas.

If you are holding a Golden Weapon in your primary or secondary slot when Mom dies, she will drop the Frog Pistol.  Storing this weapon in a Proto Chest and opening a different Proto Chest will turn the weapon into a Golden Frog Pistol; like any golden weapon you can take this through a portal to save it to your character.
Starting a new run with the Golden Frog Pistol selected will let you play as Frog.