Sees In The Dark

Unlocked by reaching the Pizza Sewers as Eyes. 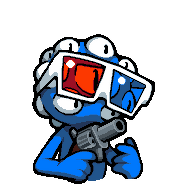 Eyes is a manipulative mutant who can outsmart his enemies and see threats coming he otherwise wouldn't have. His active allows him to lure enemies into hazards or towards himself, pull in pickups and weapons and steer projectiles away from himself.

Eyes can see better in the dark transition areas (Sewers, Crystal Caves, and Labs) as well as the Crown Vault . The completely black part of the screen is only slightly darkened and the circle of clear vision is bigger.

Eyes can use telekinetic powers to attract enemies, stationary chests, mini pickups, rads, and dropped weapons towards him. Additionally, he can slightly push away enemy projectiles, and manipulate fire and toxic gas. It also pushes away any projectiles reflected by enemies and discs from the Disc Gun. It doesn't affect grenades.

Eyes' special ability has its good and bad side, but, with the right weapons and mutations, Eyes becomes a good melee character. Combining his special ability with Throne Butt and Euphoria can almost stop enemy projectiles and pull every enemy within your melee range. Eyes is also good with both piercing and short range weapons, due to the ability causing enemies to group up and get close to you. He can also see better in the Sewers, Caves, and Labs which allows you to see enemies from further away and gives you more time to react. Telekinesis can be used to pull dropped weapons and take more weapons with you through a portal to the next area.

Eyes is unlocked by reaching the Sewers area.