Unlocked by reaching the Cursed Crystal Caves as Crystal. 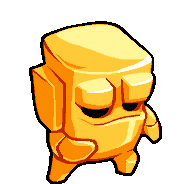 Crystal is the most survivability-focused mutant in the game. Being the only character with 10 HP, Crystal already has a defensive advantage. Additionally, Crystal can safely avoid most projectiles through the use of her active Crystal Shield. Her ease of use and extra health makes Crystal a great starting character.

Crystal starts off with 10 HP.

Crystal can create a shield around herself which prevents damage. The shield can be sustained for a short duration and Crystal can't move when her shield is activated. The shield will start shaking before automatically deactivating. Crystal is vulnerable to damage during the shield's disappear animation. The ability can't be used again until the previous shield fully disappears. Enemies will act as if they have lost sight of Crystal when she is shielding, and closer enemies will get repelled.

Attacks deflected by the shield:

Attacks negated by the shield:

Attacks that bypass the shield:

Co-op: Crystal's reflected bullets do not hurt the other player.

Crystal's Throne Butt reduces the shielding time and allows Crystal to teleport towards the cursor after her shield disappears. Aiming the cursor over a wall will only activate the shield without teleporting. (maybe)

Crystal can be considered the best starting character for a new player due to her survivability. Her health boost alongside her special ability helps withstand heavy fire, plus the shield's reflective properties allow the player to kill enemies without spending ammunition. Releasing the shield and activating it again in the right moments can make you invulnerable for long enough that you can survey the situation before running to safety, which can be really helpful in the third stage. Her teleportation ability with Throne Butt adds to this, as you can escape any danger by shielding and teleporting to a safe location.

Retrieved from "https://nuclear-throne.fandom.com/wiki/Crystal?oldid=45130"
Community content is available under CC-BY-SA unless otherwise noted.