Unlocked by reaching the Sewers on Hard Mode as Chicken. 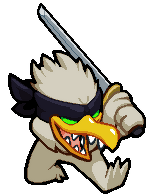 Chicken's starting melee weapon is unique to her character. She has the ability to throw weapons which deals more damage as she levels up. Chicken is also the only character that can stay alive after reaching zero HP.

Chicken begins with the Chicken Sword equipped and no ammo.

When Chicken's health reaches zero, she loses 2 max HP and runs around headless for 5 seconds. This locks the camera on her head's current position, but it will pan very slowly if her body nears the edge of the screen. Getting health in any way will allow her head to grow back, but the max HP will still be lowered by 2 if health is replenished by a Mini Medkit pickup or the Bloodlust mutation.

Walking over a stationary Medkit will recover 1 max HP. Choosing the Last Wish mutation will replenish all of Chicken's lost max HP.

Medkits have a 50% chance to spawn instead of Radiation Canisters when your character is under 50% health. When it comes to this spawn mechanic, Chicken's max HP is always treated as 8 (or 12 with the Rhino Skin mutation). So for Chicken under 50% is always under 4 HP (or under 6 HP with Rhino Skin).

A headless Chicken can teleport through portals, her timer will reset when the next area is loaded. You can also revive yourself by choosing Rhino Skin or Last Wish mutations while Chicken is headless inside a portal. 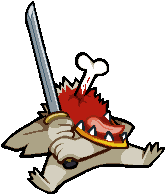 Chicken can throw her primary weapon which deals damage to a single target on contact. The amount of damage depends on Chicken's radiation level and increases as she levels up. On level 1 a thrown weapon will deal 24 damage. Each level up increases that by 2, reaching 42 damage on level 10 (Level Ultra).

Thrown weapons travel fast and very far, they can also bounce off walls. They can slightly bounce off enemies which can cause a single thrown weapon to rarely damage multiple enemies. Killing an enemy with a thrown weapon makes the killed enemy's body fly further which means bodies also deal more damage on impact. Each weapon has the same hitbox when thrown.

If you had two weapons and throw one, the secondary weapon becomes your primary. If you only had one weapon, throwing it leaves Chicken empty-handed and the thrown weapon has to be picked up again. This ability doesn't have a cooldown which means you can throw both of your weapons almost instantly.

With Throne Butt, thrown weapons pierce through targets, dealing damage per hit animation. The weapon travels fast and going through targets doesn't affect its speed, so an enemy will take damage multiple times only if it's large enough.

Chicken's abilities let you play very recklessly, running straight into combat and relying on medkit drops when headless and then trying to get a stationary Medkit on the next level to recover your lost max HP. Throwing your weapon deals a lot of damage, especially if you throw both at once, and it doesn't use any ammo. This can save your life when headless, by quickly one-shotting high health enemies that are out of your weapons range and creating a potential medkit drop. It's a good way to deal some extra damage to a single enemy, but shouldn't be used when surrounded unless you have Chicken's second Ultra Mutation. Throw weapons with no ammo. Throw weapons with slow reload, after firing them. Discard weapons you don't want to use for long periods of time. Relocate a weapon that you might use later. Chicken can also take more weapons with her to the next area, by simply throwing dropped weapons inside the portal.

Chicken is unlocked by reaching the Jungle secret area.