The I.D.P.D. Captain is initially seated at the end of a large entryway at her colossal boss's desk on the last level of I.D.P.D. Headquarters. The fight with the Captain will only start when she is attacked. Beating the Captain will end your run.

Takes a shape of a fist and charges in your direction, breaking walls along the way.

Teleports and afterwards shoots a blue sphere that splits into blue bullets after hitting a wall. This sphere can be reflected by melee (and will damage the Captain if it hits her), but when it explodes the emerging projectiles will still hurt the player (unlike reflected flak cannon shots).

Stays stationary and shoots out projectiles in two different patterns, one around herself and one in an arc in your direction. 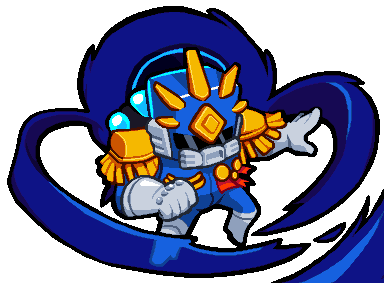 Retrieved from "https://nuclear-throne.fandom.com/wiki/Captain?oldid=41919"
Community content is available under CC-BY-SA unless otherwise noted.